Regardless of whether you use Windows, Mac OS X, Linux, a BSD, or any other operating system, there are definite things which can easily be done to increase your computer’s security. You can, of course, disconnect your computer from the Internet and the rest of the world, and though this is an effective way to increase security, it is not practical for most people. Below are some examples of how to make your computer more secure without taking the extreme measure of becoming a “digital hermit.” It should be mentioned that these tips are very useful in increasing security, but it is not an exhaustive list by any means. I would also like to especially emphasize the last tip which is “Good Sense,” without which the other tips will be of little help.

A screenshot of a firewall control in Linux:

A screenshot of the ClamTk Antivirus: 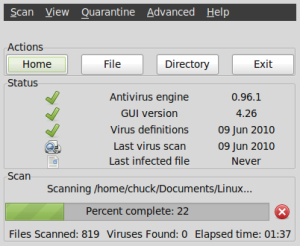 ***For more detailed information regarding computer security, you can visit the United States Computer Emergency Readiness Team website [13] and The Last Watchdog on Internet Security [14]. Also, click here to read an excellent article about Internet safety [15]. Finally, click here to read a nice summary of security basics from the Fedora Project [16].

Number of Visitors – Powered by www.statcounter.com